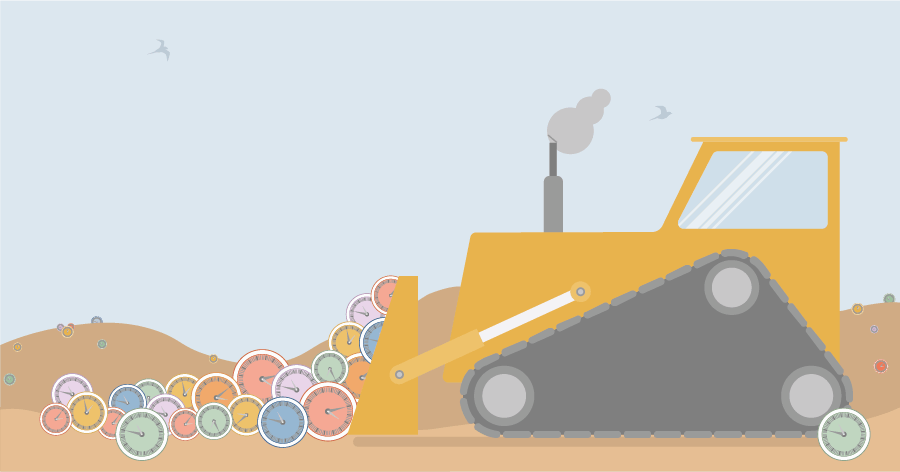 The Standish Group conducts annual research into the performance of projects. It appears that there are different time wasters in project planning so that the majority of projects are not delivered within the scheduled time. Employees incorporate a substantial safety margin during project planning to ensure that they can complete the activity on time. However, research shows that they are wasting the built-in safety margin.

In this blog, we look at the causes of this waste. We will try to provide you with tools so that you can effectively prevent and combat any waste of time. We address student syndrome, Parkinson’s law, multitasking and dependencies in project planning.

You can probably imagine a picture of this time-waster in project planning, especially if you have studied. Now it appears that this phenomenon is not limited to students and student days, but employees in your company also suffer from it.

The syndrome works as follows: if people think they have plenty of time to perform an activity, they don’t start immediately. They prioritise something else. For example, if a project manager asks an employee how long he or she needs to write a report, the employee incorporates a safety margin. For instance, the employee indicates six days, but actually only needs two.

Employees often perform less than one-third of the work while two-thirds of the planned time has elapsed. The result is that it takes a lot of effort for employees to complete the work within the project planning. This is often not successful if the work still to be performed is difficult or if another unforeseen project arises in between. In addition to causing a great deal of stress, this situation also gives an employee the feeling that the planning of the activity has been underestimated from the start. In the worst case, they will estimate the planning even more generously next time.

The second waste of time in project planning is Parkinson’s Law. This law states: “The work spreads out over the available time”. If we take the example from the previous paragraph again: a report must be delivered in six days. A total of two days, or sixteen hours, is required to write the report. According to this law, employees will spread the required effort over the six days indicated. This means that about 2.5 hours a day is spent writing the report.

In most cultures, employees are not rewarded if they are ready before the end date agreed in the schedule. Employees who have finished earlier are often burdened with extra work or are suspected of overestimating activities. This allows employees to adjust the speed of their work so that they are busy until the end date of the activity.

As with the first time-waster in project planning, employees suffering from student syndrome will find it difficult to agree on tighter deadlines, because then they have to give up the built-in safety margin. This requires a cultural change in management. If there is no longer a safety margin, management must proclaim that it is “ok” if employees take longer. For removing the safety margin please see the blog: 50% safety margin may go.

The third time-waster in project planning is multitasking. With multitasking, work is being done simultaneously on multiple activities. Now a well-known joke is that only women can multitask. However, research shows that both men and women can multitask equally well, or in fact, equally bad. Multitasking is often seen as a way to increase efficiency because everyone has something to do all the time. However, multitasking leads to a reduction in productivity.

We see that project employees are often flung back and forth between projects because project managers demand results. Employees feel compelled to make as much progress as possible on all projects, putting the progress of all projects at risk. In practice, multitasking often leads to longer turnaround time, because there are always disruptions and switching must take place regularly. Consider it as a machine that has to be reset time and again, because a different type of order is always requested. That simply takes time.

By allowing employees to concentrate on a single activity without interruption, activities are completed earlier. The illustration also shows this. An additional positive effect is that job satisfaction increases, because employees can do their work better. If you stop multitasking in your company, employees will ultimately be able to complete all the work in less time.

The final waste in project planning are the dependencies between activities and the effect of time savings and delays. Most projects have multiple activity paths that come together at some point because there is one activity that depends on completing three previous activities before the start.

The example shows that converging activity paths eliminates time savings. Path C does not contribute to an earlier delivery of the project. The delay in path A directly leads to a delay in the merged path.

In the context of capacity planning, it is important that the employees on Path C are not only scheduled for activities in their path, as this can result in them having nothing to do at some time. They are after all ready prior to the moment of merging. This also applies to Path B employees, if there is a delay in Path A. It is therefore important that employees, after completing one activity, can continue to work on another activity immediately. So you have to avoid too many dependencies in project planning because this makes it more difficult to ensure continuity of work.

To combat both student syndrome and Parkinson’s law, transparency must be created. This is achieved when employees dare to state honestly how much time they actually need to complete an activity. The employee should not be punished if more time is needed, because this can cause employees to build in a safety margin again.

In addition, combating multitasking can have a positive effect on combating the waste of time in project planning, in the form of student syndrome and Parkinson’s law. By allowing employees to concentrate on one activity at a time, the effort will not spread over the available time. The student syndrome will also not occur if you plan the order of activities tightly. Activities cannot then be pushed back.

Finally, it is advisable to prevent project dependencies as much as possible. That is why a method like SCRUM is so successful. The SCRUM method is useful for this because with this method the results to be delivered are divided into small usable partial results. These partial results are delivered in a sprint every few weeks. Not every partial result is used immediately but is ready for assembly at a later time. Meanwhile, the entire team is constantly being productive, which means that an employee rarely has nothing to do.