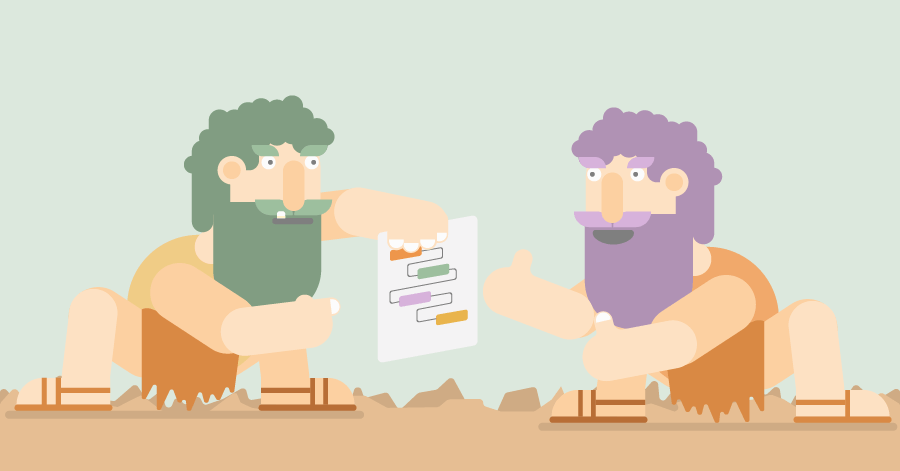 Planning is a process, not a product.

Planning is as ancient as the human race. Ever since humans began to think ahead and started hunting in groups, plans have been made to achieve the best possible result. At first, planning was based purely on (non-)verbal communication.

With the recording of the first hunting scenes, the famous cave drawings of animal hunts, the first planning was possibly created. The plans were literally recorded and represented both the activity (the hunt) and the goal (the prey). You could even say that the means were also shown in the drawings (the hunter and his spear). Imagine a group of homo sapiens in a cave, next to a fire, discussing the strategy for the next hunt and using the drawings to improve their plans. Is it going too far to call this a ‘project kick-off’?

Up until 1910, visualization of a plan was focused particularly on making the activities comprehensible through drawings, paintings, visual arts, etc. Carrying out the plans was a process!

In 1910, Henry Gantt published his ‘Gantt Chart’ and made it possible to shape possible plans into a presentation form in which the time factor was also shown. His methodology made it possible to not only show the ‘end goal’ and the ‘means’, but also to provide chronological insight into the ‘working method’ of the execution. By defining and communicating this, the focus of the person executing the project shifted more to management instead of control. Plans then became products (the Gantt Chart).

With the further development in the fields of Planning, CPM/PERT and project planning software, the focus was shifted more and more to the generation of a Gantt Chart. Planning is therefore an (end-)product for many and the planner is the producer! Recognition of the function of the planner within projects and organizations is therefore based only on an end product, although, as we read at the beginning, plans are created primarily through communication.

The project manager as process manager

In my opinion, planning should be viewed once again as a process and the planner as a process manager. The goal is not the Gantt Chart, but the supervision of all project workers, the project manager in particular, execution of the project in relation to the time factor. He/she has access to much more than the Gantt Chart and should get room for broader participation in the project process.

I see new developments, such as 4D/xD planning as a step in the right direction from product to process. Plans will be shown in other ways. We have the means to combine the time factor and the image (the drawing).

I am therefore appealing to planners to minimize their use of the Gantt Chart! No, not to get rid of it altogether, but stop to think what detail you are showing to anyone. Think about this detail, think about other ways to show it and communicate with the people involved. Don’t discuss further details so much, but rather discuss strategy, means, risks and the goal. Do it just like the homo sapiens; discuss the project together around the campfire.

Planning is a process; not a product!

Ed has been working in the (Project) Planning & Scheduling field for 25 years. His roots are in petrochemistry as a project planner. In addition, he has developed himself further as a planning consultant.